The golden sun was tossed up high
And spread its aureole to the land sprawled nigh.
The emerald woods were exuberant with
The creatures’ chimes, full of blithe.

With all its might, the gusty gale
Was clouting the trees of hills and dale.

And the crimson foliage, lay withered,
While the silver rivers silently slithered.

The ‘Land of Gods’, the incarnation of beauty,
Admired for its allure and serenity.

Uttarakhand, the land of ecstasy,
Had voyaged to the depths of despondency.

Vanquished by the natural fury,
And here’s its heartrending story-

The tumultuous thunder yelled and roared.
The wind waves soared and soared.
The smoky clouds cast their shadows.
Fog, the white gloom, asphyxiated the meadows.
The rivers and brooks swelled to double;
Lashing the shore as if they vowed to trouble.
Peace of many was swept away,
While many souls were bent in dismay.

Oh! the injustice of the God.
The innocents you punished, eh! Lord?
Maybe the eyes of heaven have misted too,
As the swept-off rain began to accrue.
The people were perished, but faith not.
Edifices were decimated, but reverence not.
Instead of the apocalypse fatal and drear,
The devoted souls are free from fear.
The Himalayas stand like warriors intrepid,
And faith smiles in the structures decrepit.
Time is doing its best to recover the abrasion.
Blessed be the souls still bent in veneration. 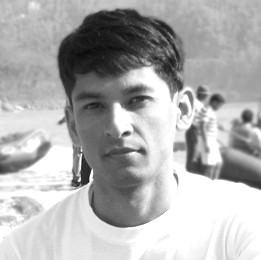