On April 23, 1930, thousands of people had gathered at Kissa Khani market in front of the police station in Peshawar in protest of the British Rule and demand for Independence. What could have resulted in massive deaths and deep emotional scars was avoided due to the courage of the brave heart- Veer Chandra Singh Garhwali.

Who was Veer Chandra Singh Garhwali? 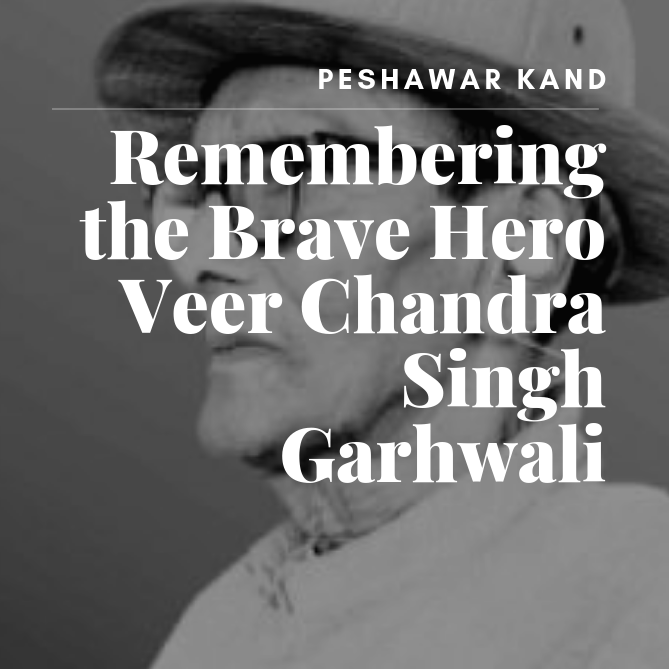 Born on December 24, 1891 in Mason Chauthan, Veer Chandra Singh Garhwali had joined the Garhwal Rifles in Lansdowne during World War I and had participated in World War I.

Since his childhood, Veer Chandra Singh Garhwali was a revolutionary thinker and a courageous man.

What was Peshawar Kand?

On April 23, 1930, thousands of people had gathered at Kissa Khani market in front of the police station in Peshawar in protest. The people with the national flag in their hands demanded independence from the British Rule. Women, children, and old people were also a part of the peaceful protest.

Under that situation, the British captain, after failed attempts of dispersing the crowd ordered the Garhwal rifles to open fire at the crowd. As soon as the order was shouted, Veer Chandra Singh loudly ordered the troop to cease fire. He had already instructed his troop to avoid firing the innocent people at any cost.

When questioned by the superiors, he maintained his stance and disobeyed firing at innocent unarmed people.

He and his entire platoon were prosecuted for treason. Despite knowing the consequences of his actions, the courage shown by Veer Chandra Singh Garhwali was extraordinary and has remained in the memories of people ever since.

What happened to Veer Chandra Singh Garhwali after Pashawar Kand?

After the Pashawar Kand, Veer Chandra Singh Garhwali was locked up in multiple prisons for 11 years and released in 1941. After being released from jail, he was involved in India’s freedom struggle. He led as the Commander-in-Chief in Allahabad during the Quit India Movement in 1942.

He was arrested again and sentenced to 3 years in prison and released in 1945.

He was a communist and this helped him enter Garhwal again on December 22, 1946.

Veer Chandra Singh Garhwali died on October 1, 1979 after a prolonged illness. The government of India issued a postal stamp in his honor in 1994.

Hi. I’m Arpana. In a world where change is inevitable, writing is my constant. I believe that the world can be best seen through stories and here I weave them for you :)

Thanks for the post.
With due respect may I know authenticity of the facts and credibility of the author scribed it ? .
Waiting for reply..