Phooldei Festival of Uttarakhand- A colourful festival of Flowers

Arriving in the month of March, the Phool Sankranti festival popularly known as the Phooldei festival is celebrated to welcome the onset of Spring season. This unique Pahari festival is celebrated during Makar Sankranti in the brotherly Kumaon and Garhwal regions of Uttarakhand. During the time of this festival, snow melts from the Himalayas and the evergreen rhododendron tree blooms with scarlet flowers and the lush green Himalayan foothills showcase their subtle beauty. On the arrival of the spring season, the beguiling Himalayas adorn its floral dress made out of the rosy rhododendrons, Sal, Bauhinia (Kachnar) and the sky-scraping oak trees that grow in the higher reaches of the mid-Himalayan valley. During the Phooldei festival, people enrapture in the festivity and the young maidens wake up early to bring the flowers from the forests. Children accompany the young girls for collecting the first flowers of Phyunli, Buras, and Basing. After this, they bring a platter or ringaal basket (a species of bamboo) in which they keep the green leaves, jaggery, coconut and fresh flowers. The young maidens and kids put the first flowers of the season on the doorstep of every house which is considered to bring good luck. Flowers are scattered at the doorstep in Phooldei Festival of Uttarakhand. [Source]

The girls sing harmonious songs while scattering the flowers and rice grains on the doorstep of every household. They pray for the happiness, prosperity and well-being of everybody and in return people offer them jaggery, rice, coconut and money. The kids visit each and every house of the village and worship the doorstep by singing- Without having ‘Sei’, a Pahari delicacy the Phooldei festival is incomplete

During this festival, a special pudding called ‘Sei’ is made which is offered to the visitors. It is a traditional Pahari cuisine that is prepared from the rice flour kneaded with curd, jaggery, and sugar. The mixture is then deep fried in ghee and sugar is added as per taste. The folk singers of the village welcome the spring season in their unique style by singing the soulful songs of Riturain and Chaiti. The traditional Pahari drummers referred to as Bajgi, Auli and Dholi visit the different villages and celebrate the festival by playing dhol-damau in the courtyards of the villagers. This auspicious festival is celebrated with zest in the hilly areas of Garhwal and Kumaon but remains unknown to the cities of Uttarakhand. On the other hand, in the mystic valley of the western Himalayas especially in Pauri Garhwal region, the Phool Deyi Festival is celebrated throughout the month. This festival is considered to be auspicious and those who have celebrated it, remember the festival with a smile on their face as their childhood memories are associated with it. 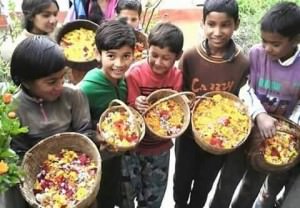 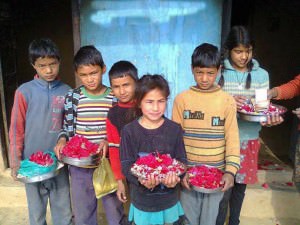 Just a doubt , Do garhwalis also call this festival as phooldei? If yes then what does dei mean in Garhwali. In Kumaon the word dei is used by southern or some western dialects only. These dialects remove the ‘la’ from the end of a word. I wonder if such rule is there in garhwali also.

I love this festival. This festival encourage our village people for their hard work. Crops almost ready. Starts Jhore in evening time. Enjoy every part of Hills after this festival. .

Thank you pragrati. It’s nice to see people are inclined towards our roots which should be with everyone.

Appreciate your work for to live our legends & customs.

Thank you Pragati for this article. I always wanted to know about this festival. Unfortunately we are failing to keep our rich garhwali heritage alive. People like you are creating a difference and helping in keepin the spark alive. Thanks again!!!

I LOVE MY UTTRAKHAND FOR FESTIVAL OF PHOOLDEI.,

I love my uttrakhand’s all festivals.